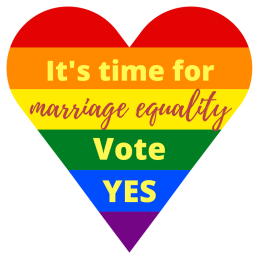 The High Court has chosen to uphold the Turnbull Government’s $122 million postal survey as constitutionally valid. This is not the outcome we had hoped for, but we had planned for. Unfortunately, we can no longer stop this wasteful, hurtful exercise from going ahead.

This shambolic government will spend $122 million on a needless process to outsource their internal problems to the Australian public, instead of having the guts to hold a free vote. But we need to put the decision behind us, and focus on one thing only – achieving a Yes result for equal marriage in Australia.

Work has already begun – many thousands of phone calls and conversations have taken place across the country. And there are nearly 100,000 new Australians on the electoral roll that are ready to have their say. The months ahead will be difficult, especially for LGBTI Australians and those who are close to them. But we have no choice but to take up the fight and work as hard as we can to get the outcome that we know a majority of Australians already want.

We call for the debate to be conducted with kindness, grace, respect and generosity on all sides. Prejudice and vilification damages us all as Australians. Labor will be standing shoulder to shoulder with the Yes campaign and with our LGBTI brothers and sisters.

We’ll be campaigning as hard as we can.